“Truth will set you free!” 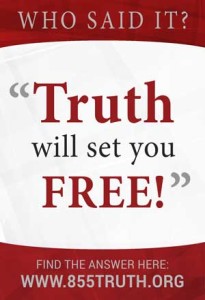 Then Jesus said to those Jews who believed Him, “If you abide in My word, you are My disciples indeed. And you shall know the truth, and the truth shall make you free.” John 8:31-32 (NKJV)

It depends a little on how you define freedom. In the context of the passage quoted above (John 8:21-58), Jesus was talking with a group of Jews who had been listening to Him preach. He offered them freedom if they would become His disciples.

Jesus’ offer offended them. They declared that they were free already. They were never in bondage to anyone, because they were children of Abraham. Why would Jesus promise them freedom when they already had it?

This last statement was a bit dubious. The Romans had conquered the Jews years before. The Greeks had ruled them before that. The Jews had enjoyed very little true freedom in the previous 400 years. But Jesus ignored that and went straight to the point. They were in bondage because they were following the deeds of the devil.

The discussion deteriorated rapidly after that. The Jews finally told Jesus that He had a demon. They even picked up stones from the street to throw at Him.

The question of freedom hinges on bondage. Are you in bondage to anything? If so, you aren’t free.

They were too proud to admit that they were in bondage.

What is freedom worth to you? Would you rather continue in bondage, or are you willing to accept freedom?

How can truth set me free?

The Bible tells us that all of us are like sheep who have gone astray. We have taken our own way in life. One of the first steps to finding freedom is to admit this truth about ourselves—we are in bondage to our sin.

For instance, most alcoholics will deny that alcohol controls them. They will tell you that they can quit drinking anytime they want to. They will never find freedom unless they accept the truth that they are in bondage to alcohol. The same is true of any sinner, no matter what the sin might be.

The next step to freedom is admitting the truth that only God can set us free. We need His help to overcome our bondage. We need to swallow our pride and come to God in true repentance, and ask for His forgiveness and help.

The Bible tells us that we are not capable of directing our own steps. We need God’s help to be free. We can’t find true freedom unless we are willing to admit that truth and ask Him to direct us.

YOU can be free!

Jesus promised it. Get rid of your pride and claim that promise. YOU can be free!