Can you trust what the Bible says to be true? To be Truth? To be dependable? Are you willing to base your future welfare on what it says?

Many times, when adversity comes to us as Christians, we feel like we have been let down by God. We possibly struggle to accept what has happened to us and we may even lash out at God. 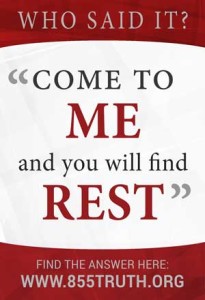 Jesus Christ said this: Come to Me, all you who labor and are heavy laden, and I will give you rest. Take My yoke upon you and learn from Me, for I am gentle and lowly in heart, and you will find rest for your souls. For My yoke is easy and My burden is light.” Matthew 11:28-30 (NKJV) Is your soul tired? Do you know what it feels like to have a tired soul? It’s different from having a body that is tired from working hard all day. That’s a good feeling, and it helps us to sleep at night. But having a tired soul isn’t a good feeling. It tends to keep us…

Jesus Christ said this: Then Jesus said to those Jews who believed Him, “If you abide in My word, you are My disciples indeed. And you shall know the truth, and the truth shall make you free.” John 8:31-32 (NKJV) Are you free? It depends a little on how you define freedom. In the context of the passage quoted above (John 8:21-58), Jesus was talking with a group of Jews who had been listening to Him preach. He offered them freedom if they would become His disciples. Jesus’ offer offended them. They declared that they were free already. They were never in bondage to anyone, because they were children of Abraham. Why would Jesus promise…

Jesus saith unto him, I am the way, the truth, and the life: no man cometh unto the Father, but by me. John 14:6 Read more

Is our New Testament text reliable? Some critics doubt that we even have the original New Testament. This issue can only be settled by using bibliographical tests for reliability, similar to what would be used to judge the Iliad or Caesar’s writings. The NT was completely written by baptized Jews1 in the 1st century AD. We have at least 24,000 manuscripts of NT, the earliest of which are dated within 100 years or so of its actual composition. The earliest known manuscript is the John Rylands papyrus fragment of John Rylands known as P52, containing John 18:31-33,37-38, dated to c. AD 125. Compare this to other great works (MSS = Manuscripts):

Does truth really exist? How can we know? Who is capable of defining truth? In answer to these questions perhaps we could ask, “Does the sun shine? Can water freeze? Is life real?” The answers to these questions demonstrate that truth does in fact exist. These are things that can be verified by scientific testing.

Since the beginning of time, people have pondered the question of what the truth really is about a number of subjects. Do convincing answers exist for questions about where we came from, why we are here, and where we are going when we die? If there are such answers, is it possible for us to know them? Or rather, must each of us create our own “realities” by formulating our own opinions about these matters?