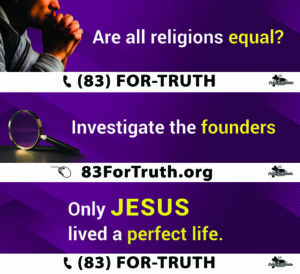 Are all religions equal?

Many people insist they are, but upon what basis are these claims made? Do all roads really lead to
Heaven? Or Nirvana? Or Jannah? What about the happy hunting grounds? Or wherever it is the
proponents of a particular philosophy seem to aspire to attain?
How may one determine whether the various competing religions present truth in their belief systems?
Is there really no substantial difference among them? What about those religions which insist upon
exclusivity? That theirs is the only way and the only truth? If that claim is true, then all other religions
are false; but if that claim is not true, then at least their religion is false. Either way, philosophically, if
any religion claims theirs is exclusively true – and most do – then it is impossible for all religions to be
equally true.
Christianity certainly makes exclusive truth claims. Jesus said, “I am the way, the truth, and the life: no
man cometh unto the Father, but by me.” (John 14:6) His disciples said, “There is none other name
[than Jesus] under heaven given among men, whereby we must be saved.” (Acts 4:12) Those are
exclusive truth claims, and both Jesus and His disciples declared and believed them.

Among the more than 4,000 religions in the world, there are five which predominate: Christianity,
Judaism, Islam, Buddhism, and Hinduism. More than 80% of the world’s population identifies with one
of these five.All of these major religions had a lawgiver, and most of them had a founder. Christians are, by
definition, disciples or followers of Jesus Christ. (See Acts 11:26.) In that sense, Jesus is the founder of
Christianity – not Abraham, not Muhammad, and not the Buddha. (Hinduism has no single, specific
founder.)
The historicity of Jesus Christ is well-documented and declared by myriad voices of authority. His
disciples wrote of Him, His detractors provided testimony of His existence, and calendars mark time
from His entrance into the world. His statements have been carefully preserved through two millennia,
and both educated and uneducated individuals have spent lifetimes examining and reexamining them.
His miracles have defied natural explanations and confounded the wisest men of His day, as well as
those of succeeding ages. The record of His existence is clear, and His teachings and His supernatural
actions are available for all to consider.

Only Jesus lived a perfect life.

Without detracting from anyone who founded other religions (and they all had their faults), the
testimony of Jesus’ perfect life stands unparalleled in human history. To the Christian, the reason for His
perfection is obvious: He, unlike any other in human history, was God come down to dwell in a physical
body. Unlike other religions, Christianity has not only a lawgiver, but also a God who came down –
down into human existence.
The disciples of Jesus emphasized His perfection. One of them said, “Christ . . . suffered for us, leaving
us an example, that ye should follow his steps: who did no sin, neither was guile found in his mouth:
who, when he was reviled, reviled not again; when he suffered, he threatened not; but committed
himself to him that judgeth righteously . . .” (1 Peter 2:21-23, emphasis added). Another asserted, “In
him [Christ] is no sin” (1 John 3:5, emphasis added). Yet a third made this declaration: “He hath made
him [Christ] to be sin for us, who knew no sin; that we might be made the righteousness of God in him
(2 Corinthians 5:21, emphasis added). These verses make it clear that Jesus was not guilty of sin, that is,
disobedience to the natural law of God and the order of His creation, in any way.
Even the enemies of Jesus emphasized His perfection. On one occasion, officers were sent to
apprehend Him but returned empty-handed with this explanation: “Never man spake like this man”
(John 7:46). The Roman ruler who examined Him at the time of His trial and subsequent crucifixion
thrice declared, “I find no fault in Him” (John 19:4, 6), even declaring Jesus to be “just.” The one who
betrayed Him to the Jewish rulers soon acknowledged that Jesus was innocent of any of their
accusations. The thief on the cross heralded, “This man [Jesus] has done nothing amiss” (Luke 23:41).
And the centurion at the cross said He was “righteous.” Perhaps never was such an effort put forth to
identify imperfection in any individual as was done with Jesus, yet with all the scrutiny and focus that
wicked men could exert, His goodness and perfection remained unscathed. Only Jesus was the perfect
One!