Should I Participate in War? 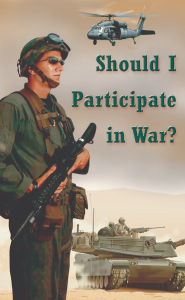 We live in a world of ever-increasing violence and insecurity. Governments constantly work for agreements, peace, and globalization, but wars and armed conflicts continue to increase. This does not surprise Bible-reading Christians, for Jesus said, “When ye shall hear of wars and rumours of wars, be ye not troubled: for such things must needs be” (Mark 13:7).

How should we Christians, who follow the Prince of Peace, relate to war? Should we participate in the military actions of the countries where we live?

To answer these questions, we must go to the Bible, particularly the New Testament. In the Old Testament, the earthly nation of Israel was God’s people, and He commanded them at times to engage in warfare. However, under the New Testament, God’s people belong to a spiritual kingdom that includes people of every nation in the world, and He calls them to be peacemakers.

What Does the Bible Say?

Let’s look at a few references relating to the Christian and violence. This is a partial list, because there are many, many Biblical references on this theme.

1. Jesus teaches us to show love and kindness to our enemies.

“Ye have heard that it hath been said, An eye for an eye, and a tooth for a tooth: but I say unto you, That ye resist not evil: but whosoever shall smite thee on thy right cheek, turn to him the other also” (Matthew 5:38, 39).

“Ye have heard that it hath been said, Thou shalt love thy neighbour, and hate thine enemy. But I say unto you, Love your enemies, bless them that curse you, do good to them that hate you, and pray for them which despitefully use you, and persecute you” (Matthew 5:43, 44).

“Love ye your enemies, and do good, and lend, hoping for nothing again; and your reward shall be great, and ye shall be the children of the Highest: for he is kind unto the unthankful and to the evil” (Luke 6:35).

“Recompense to no man evil for evil. Provide things honest in the sight of all men. If it be possible, as much as lieth in you, live peaceably with all men. Dearly beloved, avenge not yourselves, but rather give place unto wrath: for it is written, Vengeance is mine; I will repay, saith the Lord. Therefore if thine enemy hunger, feed him; if he thirst, give him drink: for in so doing thou shalt heap coals of fire on his head. Be not overcome of evil, but overcome evil with good” (Romans 12:17-21).

2. The Spirit of Christ is contrary to the spirit of this world.

When James and John wanted to call fire from Heaven upon the enemies of Jesus, He reprimanded them: “Ye know not what manner of spirit ye are of. For the Son of man is not come to destroy men’s lives, but to save them” (Luke 9:55, 56).

3. The apostles proclaimed that their loyalty to God was above all other loyalties.

4. Christians belong to the kingdom of Christ, which is a spiritual kingdom.

Jesus told Pilate, “My kingdom is not of this world: if my kingdom were of this world, then would my servants fight, that I should not be delivered to the Jews: but now is my kingdom not from hence” (John 18:36).

The Christian’s warfare is spiritual, not physical. “Though we walk in the flesh, we do not war after the flesh: (For the weapons of our warfare are not carnal, but mighty through God to the pulling down of strong holds)” (2 Corinthians 10:3, 4).

5. Because Christ’s church is universal, all true Christians in every nation are brothers in Christ.

“Whosoever hateth his brother is a murderer: and ye know that no murderer hath eternal life abiding in him” (1 John 3:15).

6. The Christian is a follower of Jesus Christ and keeps His commandments.

“For even hereunto were ye called: because Christ also suffered for us, leaving us an example, that ye should follow his steps” (1 Peter 2:21).

“He that saith, I know him, and keepeth not his commandments, is a liar, and the truth is not in him. He that saith he abideth in him ought himself also so to walk, even as he walked” (1 John 2:4, 6).

The true Christian must live as Jesus lived, imitating His life and obeying His teachings.

7. Obedience to Christ Jesus is costly.

“Then said Jesus unto his disciples, If any man will come after me, let him deny himself, and take up his cross, and follow me. For whosoever will save his life shall lose it: and whosoever will lose his life for my sake shall find it” (Matthew 16:24, 25).

“All that will live godly in Christ Jesus shall suffer persecution” (2 Timothy 3:12).

What Does History Teach Us?

History shows us that it is quite possible to obey these teachings of Christ. During the first centuries after Christ, the believers lived according to these principles, refusing to serve in the Roman army. During the sixteenth-century Reformation, many Christians faithfully demonstrated love and meekness by returning good for evil and refusing to fight for their lives.

Over the last 2,000 years, many believers have lived according to Christ’s teachings. These peaceful Christians were not always perfect, but they demonstrated a sincere desire to live as the Prince of Peace lived. Their convictions against resisting evil and participating in war sometimes brought them opposition and persecution. Many, in their desire to obey Christ, migrated from country to country to escape military service and fighting.

In a world where hatred between nations, peoples, and individuals is so rampant, it is vitally important that we Christians renew our loyalty to Jesus Christ. We need to testify of our love and good will to all men, and we must put that love and good will into practice. We must love all men, even those who consider themselves our enemies. We must not allow ourselves to feel or express contempt or hatred toward any person of any nation.

When Jesus and His followers were hated and wronged by others, they chose not to hate, retaliate, or resist. They chose instead the way of love, suffering, and death. May their faithful example challenge us to refuse any military involvement, whether combatant or noncombatant. We should pray for our country’s leaders, respect our government, obey its laws, and pay our taxes, but we can never carry arms against another human being.

This life of loving others, even our enemies, does not belong only to Christians in certain denominations, but to every believer who yearns to live for and be like the Lord Jesus. The true Christian is a heavenly ambassador who shows love, pardon, and mercy to all. God’s desire is that every believer in every place faithfully represent Jesus Christ, the Prince of Peace. May we be faithful!