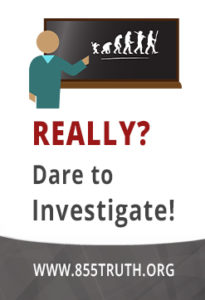 It is a sad testimony for a person to be ignorant, and it’s even sadder for that person to be deliberately ignorant. Yet many supposedly-intelligent people choose that very approach to the most-basic facets of their existence. The Bible speaks of those individuals when it says, “They deliberately overlook this fact [of the beginning of creation], that the heavens existed long ago, and the earth was formed out of water and through water by the word of God . . .” (2 Peter 3:5-6 – NKJV)

Do you know that more than 65% of twentieth-century Nobel Prize winners believed in God? Do you know that there is no observational science to indicate that life spontaneously originated (or originates) from non-life, or order from disorder, or design from chaos? Do you know that a true scientist is willing to consider and investigate all the evidence before arriving at their conclusions? Do you know that much of what is currently labeled “science” is really only a philosophy that masquerades as science?

Many individuals who were once inculcated by philosophies and traditions without logical or scientific substance, have discovered authentic truth. (See Colossians 2:8.) One individual framed his conclusion thusly: “Our world is not a random collection of colliding molecules, populated by millions of animated accidents, helplessly assisted by cruel fate!”

Today, I challenge you to dare to investigate! Authenticity is obtainable, and it’s found only in Jesus Christ, of whom the Bible says, “All things were made by Him; and without Him was not anything made that was made. In Him was life, and the life was the light of men.” (John 1:3-4 – KJV) Are you willing to authentically what the Bible teaches about origins, the purpose of life, and the God who created and loves us each?