It Doesn’t Matter… Or Does It? 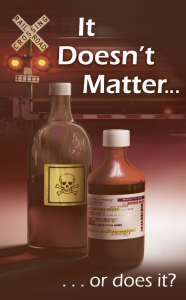 “IT DOESN’T MATTER what you believe, as long as you are sincere.” That’s what a plumbing salesman told me one day—and so many people have said the same thing that it is almost a proverb.

We put a premium on sincerity, because it’s so rare in this age of sham. We all admire the sincere man, but we despise hypocrisy. We have great respect for a man so sincerely earnest in his convictions that he is willing to die for them.

But is sincerity enough?

Bill sincerely believed the railroad tracks were clear, but he died instantly when the train smashed into his car.

Mrs. Jones sincerely believed she was taking a dose of medicine from the medicine cabinet, but the poison she took killed her.

Joe Brady sincerely felt he was doing a good thing to rid the community of the man he hated. But the court disagreed, and he went to the electric chair.

The statement, “It doesn’t matter what you believe,” assumes that any faith is all right and will get you to Heaven if you follow it sincerely. To believe that is fatal!

Many who earnestly worship images of wood and stone are ever so sincere, but they are lost. The Hindu fakirs who go on long pilgrimages or lie for years on beds of spikes are utterly sincere—but they are lost. Muslims stop their work and drop to their knees and pray to Allah five times daily. Many of them are sincere, but without Jesus they are lost. Many Jews with unquestioned sincerity go through a careful ritual of feasts and holy days, but if they are among the multitudes who have rejected the Christ, they, too, are lost.

Not even all who call themselves Christians are saved. If you place your hope of salvation in keeping the sacra­ments of a church, you are lost. If you rest your faith in religious ceremonies or a reli­gious system, you are lost. If you think the gates of Heaven will swing open for you because you have done many good things, you may be one hundred percent sincere, but you are certainly lost. If you place your hope in some past experience such as praying a prayer or responding to an altar call, but do not know Jesus personally and do not seek to obey Him, you are lost. Jesus said, “Not every one that saith unto me, Lord, Lord, shall enter into the kingdom of heaven; but he that doeth the will of my Father which is in heaven.”

It is the devil’s lie that it makes no dif­ference what you believe. It makes a world of difference—an eternity of difference— what you believe! A person can be saved only by coming as a needy, helpless sinner to the Lord Jesus Christ and accepting His pardon— a pardon made possible because Christ died on the cross for us. He alone can save us and keep us saved. “Neither is there salvation in any other: for there is none other name under heaven given among men, whereby we must be saved,” cried the Apostle Peter (Acts 4:12).

It does matter what you believe. Anchor your faith in the Lord Jesus Christ with all the sincerity of your heart, and He will give you peace with God and everlasting life.