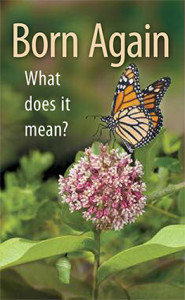 Born Again – What does it mean?

To become a Christian

It’s common to read or hear about people who claim to be “born again” Christians. But I wonder if most people understand what being born again involves. I’d like to explain.

It’s hard for non-Christians to understand the new birth. When Christ first told Nicodemus that he had to be “born again” to inherit eternal life, Nicodemus was astounded. “How can a person possibly be ‘born again’?” he asked. “Can he enter his mother’s womb after he’s grown and be born a second time?”

Nicodemus didn’t understand that Christ was talking about a spiritual birth. Just as a person becomes part of the human family through physical birth, he becomes part of God’s family through spiritual birth. When Christ explained how this spiritual birth works and what effect it has on a person’s life, He said, “The wind bloweth where it listeth, and thou hearest the sound thereof, but canst not tell whence it cometh, and whither it goeth: so is every one that is born of the Spirit.” We can’t see the wind. We know it’s there, however, by the sound it makes and the things it does. Similarly, we can’t see the new birth. We know when it has taken place, however, because of the moral and spiritual changes it has made in a person’s life.

From darkness to light

Why do some people pass from spiritual death and darkness to spiritual life and light while others do not? Jesus answered that question. He said, “Light is come into the world, but men love darkness rather than light because their deeds are evil.” Some people don’t want to know the truth about God, Christ, sin, or salvation because it would make them uncomfortable if they did.

A university professor once said: “I used to think my problem with Jesus Christ was intellectual. Now that I’ve made a careful study of His life and weighed the evidence of His deity, I’ve concluded that my problem with Him is moral rather than intellectual. To be honest about it, I’m not a disciple of Christ because I don’t want Him messing up my life.” Despite his unbelief, he was at least honest about his difficulty with Christ. Most who claim to have intellectual problems with Christ haven’t really investigated the evidence. Their intellectual objections are nothing more than a smoke screen to cover their sinful behavior.

When Adam and Eve sinned, they hid among the bushes in the Garden. They didn’t want to face God after what they had done. Men have been hiding ever since.

A major difference between the person who has been born again and the one who has not is that one has been spiritually enlightened and the other has not. One is walking in the light; the other in darkness.

From death to life

Another difference is that one has received spiritual life and the other has not. One is alive in Christ; the other is dead in trespasses and sins. Adam and Eve died spiritually when they sinned. This state of spiritual death remains until a person is made alive by the Spirit of God.

After being born again, one young believer exclaimed, “I went to the altar like a candle without light. There was no meaning or purpose in my life. But while I was kneeling in prayer something happened. God touched my heart. He set my candle on fire. Everything is different now. Spiritual death has been replaced with spiritual life. A love for Christ has been planted in my heart. I’ll never again be the same.”

Amazing moral and spiritual changes occur when a person comes to Christ. Spiritual things that seemed unimportant and worthless before are suddenly filled with meaning. Worldly pleasures which were so important before suddenly lose their appeal. Old things pass away; all things become new!

The new birth is difficult to explain to someone who has not experienced it. How do you explain spiritual darkness being replaced by spiritual light? How do you explain spiritual death being replaced by spiritual life? How do you explain a person’s character being changed in a moment of time? Yet, this is what happens when a person gives his heart and life to Christ. It’s what God promised when He said, “A new heart will I give you and a new spirit will I put within you.” It’s what He promised when He said, “I will put my laws in your mind and write them upon your hearts.” It’s what happens when God places His love in our hearts (see Ezekiel 36:26; Hebrews 8:10).

The new birth is not man reforming himself. It is not man turning over a new leaf or resolving to do better. It is God changing a man’s heart from the inside out.

A group of barbers, wanting to show their true Christian spirit, took a derelict from skid row and gave him a haircut, a bath, and a shave. Then, they dressed him in a new suit of clothes, paid three months’ rent on an apartment, and gave him $250.00 to make a brand-new start in life. Three days later, however, the man was in the gutter again, new suit and all. Their mission had failed. Why?

Christianity is not adhering to a creed, attending church, or believing the right things about Jesus Christ. It is Christ coming to live within a person’s heart and making marvelous changes from the inside out. Drunkards become sober, prostitutes have their virtue restored, thieves become honest, the stingy become generous, liars become truthful, the grumpy become kind, and the hateful become loving. Salvation is not self-improvement; it is complete transformation: a conversion. Before conversion man dislikes what God likes. Afterward he likes what God likes. “If any man be in Christ, he is a new creature: old things are passed away; behold, all things are become new.” That’s what being born again is all about.

Satan tries to convince people they don’t need a heart change. Some people live very good lives, it’s true. But no one is so good that he doesn’t need God’s forgiveness and a change. Spiritual life comes only when Christ enters the heart.

Some people think they must straighten their lives out before coming to Christ. But we can’t change our sinful nature anymore than a leopard can change its spots. Only God can regenerate our hearts. He doesn’t ask us to change ourselves. He asks us to come as we are. He’ll do the rest.

Some have a great emotional experience when they come to Christ and are born again. Others experience little or no emotion. They may not even be able to pinpoint the exact time when they gave their hearts to Christ, but they know they did. They know because they trust and serve Christ and have His joy and peace in their hearts.

Conversion is similar to the wind. To some it comes as a gentle breeze; to others as a rushing tornado. To some it is a quiet and tender experience; to others it is very dramatic. The important thing is that Christ moves from the outside of your heart to within.

“As many as received him,” the Bible says, “to them gave he power to become the sons of God, even to them that believe on his name” (John 1:12). To receive Christ means that one surrenders his self-will and invites Jesus to take control of his life.

Through the ages God has been calling people to Himself. Those who have come have been born again by His Holy Spirit. They have received His forgiveness, His joy, and His peace in their hearts.

In the third century, Cyprian (bishop of Carthage) wrote to his friend Donatus: “It is a bad world, Donatus, an incredibly bad world. But I have discovered in the midst of it a quiet and holy people who have learned a great secret. They have found a joy which is a thousand times better than any of the pleasures of our sinful life. They are despised and persecuted; but they care not. They are masters of their souls. They have overcome the world. These people, Donatus, are Christians . . . and I am one of them.”

That is one of the most wonderful confessions a person can ever make. I am one of them too. What about you?