Are YOU sure this evolved? 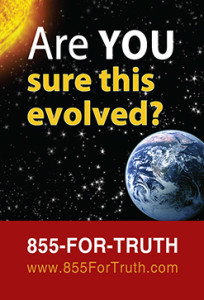 “In the beginning God created the heaven and the earth.”

Throughout time men have tried to unlock the secrets of the universe, especially how it all began. A host of theories have been presented, only to be discarded for yet a newer one. This past century has seen the rise of evolution as the dominate theory. Does this theory unlock truths concerning our origin, truths which had been hidden through the ages? Evolutionary claims say matter is self-originating from nothingness, order is self-produced from mindless chaos, and that we really have no need of a Creator God.

Men have learned how to take atoms apart and how to put them together again. Yet with all the technological advances of the world at their disposal, man cannot create even one tiny atom. The intricate design and precise order of a simple atom is an astounding witness to the creative power of our infinite God. The Bible tells us God created all things. Yet men refuse to believe—why? Obscured deeply within the theory of evolution is the fear that if God is truly the Creator of atoms, matter, the universe, and life itself, then man is accountable to God.

Believing God’s Word, we understand the universe and everything in it was conceived in the mind of God and called into being through His infinite power. Not only did He create the world, but God sent His Son Christ Jesus, who with His death paid the price of our sins. There is no other means by which we can be saved from our sinfulness. Eternity is approaching for every one of us. Where do you stand: on the truth of God’s Word, or on the theory of man?

Pause and examine your belief, because you have an appointment to stand before your Creator.